↓ Skip to Main Content
Home › Vision › Who Are Skateboarders?

Skateboarding appeals to all kinds of people. Although a majority of skaters are teenage males, a visit to any popular skatepark will present a diverse collection of patrons. In 2009 there were 9,281,500 skateboarders in the United States. The number goes up and down from year to year but on average has been rising steadily since the 1970s. 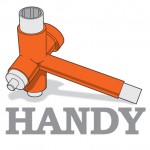 6.3-million skateboarders in the United States

Just because someone stepped on a skateboard last year doesn’t mean they’re ready for a skatepark. We know that there are some skaters that ride all the time. We’ll call these “core skaters.”

Core skaters ride their boards at least once a week, (on average). 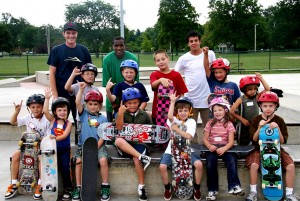 3,150,000 American youth (or 1.7% of all youth) are core skaters that would benefit from access to a skatepark today.

You can easily apply this breakdown to your own community. If there are more than 5,000 residents in your town, and you live in the United States, you can find out how many of them are 18 years old or younger at the U.S. Census website. After finding your city or town, you will find the line that reads “Persons under 18 years.” The number in the right column is shown as a percentage of your town’s total population.

Now that you know how many people are in your community, you can take that number and multiply it by 0.043 (or 4.3%). Whatever you come up with is the number of skaters in your town that need a skatepark today. It’s a handy number to know!

If you want an even more specific number, you can take your local youth population and multiply it by .086 (or 8.6%) to get the number of people in this age group that have stepped on a skateboard.

Core skaters are defined as having skated 52+ times per year (once a week, on average). Casual skateboarding participation varies from year to year, likely based on various skateboarding trends such as long-boards and cruisers.

Nearly half of all skateboarders skate once a week or more.

The percentage of core skateboarders has been steadily rising for over a decade. In 2009, the core represented 27.8% of all skateboarding, whereas in 2010 it was 45.2%. Nearly all core skaters start out as casual skaters, so the number of casual skaters can help us predict what tomorrow’s core numbers may look like.

Over 40% of skateboarders ride both long-boards and “trick” boards. Long-boards are used primarily for transportation and just cruising around. This suggests that a significant portion of all skaters use their skateboards for both recreation and transportation.

Skateboarding, for many, becomes the recreational activity of choice well into adulthood. Market research studies reveal that skateboarders are, on average, 14 year old males. This is the thickest point of the bell curve.

Clearly, for some skaters, the activity remains appealing and sustainable throughout their lives. 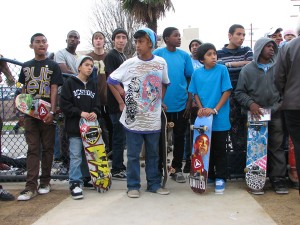 The hallmark of skateboarding culture is that it is welcoming to anyone that approaches it with the intention of improving his or her personal skill. Class, race, gender, weight, and other hobbies are irrelevant provided that the participant’s enthusiasm for the actual act of skateboarding is genuine. In this way, skateboarding is egalitarian and inclusive. Because skateboarding is not a team sport, the success and/or enjoyment of skaters is not dependent on other skaters’ performance. In other words, an experienced skateboarder can recreate with someone learning fundamental skills as equals. There is nothing to gain or lose from seeing other people land a trick for the first time except for the joy of seeing them do it.

Some activities disrupt this pattern. Skaters routinely reject entities and individuals that monetize skateboarding if those entities or individuals have not demonstrated a sincere love for the physical act of skating. Few sports and athletic activities can claim the same degree of protectionism from the involvement of non-participants. Due to this protectionism, skaters tend to see influences from within skateboarding as a “trusted source” while influences outside of skateboarding are seen as suspect. This has enormous relevance when it comes to rules compliance. A non-skater telling a skater to wear a helmet, for example, will be less effective than a skater suggesting the same thing.

If an individual, agency, or company’s integrity is recognized by skateboarders, the fraternity is empowering and supportive. Agencies and companies, having earned skaters’ trust, have the opportunity to develop partnerships that can pay big community-building or brand-loyalty dividends. For individuals, the friendships formed through this mutual interest can last a lifetime.