A typology is a related group of similar items arranged in a way to illustrate their similarities and differences. Typologies are like sub-groups. In the context of skateparks, typology describes the organization of skateparks by size, usage, capacity, material, and so on.

Skatepark typologies can be as confusing to experienced skateboarders as they are to the general public. This confusion is compounded by skate lingo and esoteric planning terms. When we talk about skatepark typology, we’re saying that skateparks can be considered along the same lines as other community projects, and that there are different ways of considering them. Each type of skatepark has its own strengths and weaknesses, and you cannot determine what is best for your community until you fully understand what your options are.

The primary skatepark typology is based on its size. A skatepark’s size determines how many structural attractions it can accommodate. A large skatepark can fit more cool stuff and allow more people to comfortably use it at once.  A small skatepark does just the opposite; few people can use it at once and it can only provide for one or two structures. Although it may not seem like it, both of these types of skateparks are important and can play an essential role in the skatepark vision.

Material and design considerations will be made later. These typologies fall under the “design” phase of skatepark development. While developing the skatepark vision, your main concern will be how much skatepark your community needs.

The capacity of each type of skatepark is primarily based on size. The design of the terrain can have a major impact on the facility’s capacity. For estimating your vision’s capacity, you should base your assessment on a basic model that presumes that each feature or “line” within the skatepark supports the maximum number of simultaneous users. An experienced, professional skatepark designer will be comfortable discussing skatepark capacity. The logic behind capacity assessment presumes that skateboarders share the active space. At a certain number of users, new arrivals will see that the space is too crowded and will move elsewhere. If the park is too crowded, they will leave.

Each skateboarder needs a particular amount of space. Imagine a simple trick that doesn’t require an obstacle.

The skater pushes once…

…sets his or her stance…

The skater traveled 75 linear feet and used 10 feet of width, and the “path” includes 5 feet on either side as a safety buffer. 75 x 20 feet equals 1,500 square feet. The individual doing the trick isn’t the only one using that space. There are 9 other skaters “sharing” the space and waiting their turn. Therefore, 10 skaters can share 1,500 square feet. This model scales well for all kinds of terrain and can be corroborated by observation. 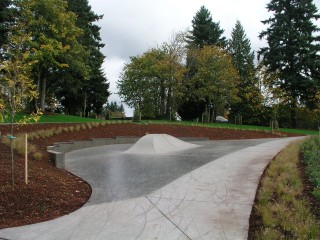 Skate spots are the smallest building block in a community-wide system of skateparks. They can be between 1,500 to 5,000 square feet, and can serve as many as 10 simultaneous users (depending on size and design).

In its most basic form, the skate spot is a single structure with enough flat space leading to and from it to accommodate one skater at a time. The design of the structure is irrelevant; what makes it a “spot” is that it’s small. Most skate spots are about 3,000 square feet and feature a single structural attraction. Typical skate spots feature either a bank, ledge, stair set, rail, or a single transitional form. (In skateboarding terms, transitional forms are curved, like quarterpipes, for example.) Larger skate spots might feature a few of these structures. One thing that almost all skate spots have in common is that they leverage existing public structures in some way, like a sidewalk or existing slab.

Spots can be designed and built specifically for skateboarding; they may combine a structure created specifically for skateboarding with ordinary public sidewalks and paths; or they may even be structures originally designed for another purpose that happen to be popular with skateboarders. All of these can be effective, successful skate spots. You’ll find examples of different skate spot designs in the Design chapter.

Skate spots can comfortably afford four skaters concurrently, and six individuals will lead to intolerable delays between turns. Skate spots with two or more points of egress will typically allow for slightly higher capacities as a few more individuals can remain “on deck” for their turn without losing patience. Conversely, skate spots with a single point of access will have a slightly lower capacity. (Again, skate spots can comfortably serve 4—6 individuals at a time, so the design will not significantly increase capacity.)

Skate spots should not be considered a low-cost alternative to a skatepark. However, skate spots can address three important needs in a large community.

First, skate spots can be used to meet the needs of a very small sub-community that may not have easy access to one of the larger skateparks in the community. Remote, suburban enclaves are likely candidates for skate spots.

For example, in West Linn, Oregon, planners were working on a skatepark. The site was perfect for a large residential enclave, but was far away from residents across town. To help serve those remote residents, planners built an additional 3,500 square foot skate spot. A second 10,000 square foot neighborhood skatepark would have been prohibitively expensive, but an additional skate spot provided an excellent solution to meet their community’s specific needs. 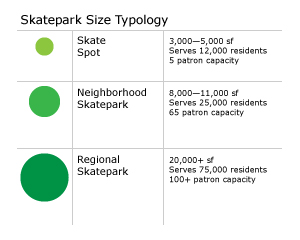 Second, skate spots can draw skateboarders along desired routes and create linkage between two destinations. The skate spot might replicate, for example, a popular but nuisance attraction nearby. By creating a skate spot that is an improved version of the non-sanctioned spot, skaters will be drawn away from that place where skating is inappropriate and toward the sanctioned skate spot where it IS appropriate.

For example, when city planners in Vancouver, British Columbia, created their new skatepark, they saw that it was equidistant between two stops on the light rail system. Skaters going to the skatepark via train would use either stop, depending on the direction they were approaching from. Both stops had long, sweeping paths and long ledges leading from the elevated train stop. One of the stops was near some recreation fields and the other was adjacent to condos. The ledges at both stops had anti-skateboarding devices installed on the ledges, rendering them unskateable. (These devices are popularly known by the brand-name “Skate-Stoppers.”) Planners preferred that the skaters use the stop near the fields. Their solution was to remove the anti-skateboarding clips from the ledges at the stop nearest the fields. This attracted skateboarders to that stop due to the additional attraction, and away from the stop near the condos where the anti-skateboarding devices were still installed.

Third, skate spots can be used to attract small amounts of human activity to an area to help displace undesired activity. Skateboarders, particularly ones in their later teenage years, are generally willing to skate in places that most people would not consider appropriate for recreation. Because of this, skaters can serve as important agents in urban renewal efforts. (That’s not to suggest that skaters should be expected to recreate in any dangerous or unsavory place there happens to be a skate spot, but rather that they may be more willing to visit those places where non-skaters may not.)

In Tacoma, Washington, city leaders were frustrated with the continued skateboarding activity at a popular unsanctioned skate spot. The city installed “No Skateboarding” signs and Skate-Stoppers along the edge of the most popular ledges. Skateboarding activity at the location stopped, but other undesired activity—worse activity, by popular measure—increased. The site attracted graffiti and broken glass became a common sight. Skateboarders approached the city and made an appeal for sanctioned access to the popular spot. The city agreed, the skate-stoppers were removed, and skateboarding at the spot resumed. Almost immediately, the graffiti abated and broken glass—when it occurred—was quickly cleaned up by visiting skaters. The skateboarding activity displaced those that would use the space for more destructive purposes. 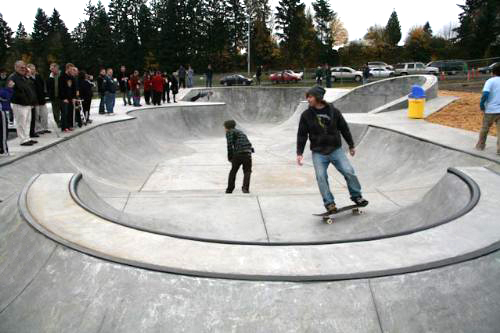 Neighborhood skateparks are between 6,000 to 12,000 square feet and can adequately serve a population up to 25,000 residents. They are generally a mix of terrain styles and provide some comfort amenities. A neighborhood skatepark of average size and quality design can serve as many as 60 simultaneous users.

The neighborhood skatepark is the basis for all other skateparks. It is the most common, easiest to develop, and what most people envision when they hear the word “skatepark.” Neighborhood skateparks are the backbone of your community-wide skatepark system. They serve as local attractions for the area youth and will almost immediately become a community landmark for kids in the vicinity.

Every neighborhood skatepark should contain a defining characteristic—usually a structural element—that helps visitors identify that facility as a unique place. These “signature elements” are powerful devices that allow skaters and non-skaters to describe the skatepark in a way that goes beyond skate lingo. Skaters will often talk about a skatepark in terms of the specific design characteristics and use terms that are esoteric and foreign to a non-skating public. However, signature elements can provide a point of access for skaters and non-skaters. We’ll go into signature elements more in the design chapter.

NOTE: 10,000 square feet may sound like a large area. However, it’s about the same size as a baseball field’s infield area.

The regional skatepark is primarily defined by its large size and capacity to handle crowds. They often draw visitors from all over the nation and, although they may seldom be the sole purpose of a vacation, they are typically visited by travelling skaters as “must see” attractions.

Most skateboarders can list the skateparks they would most like to visit. They are almost all larger than 20,000 square feet and qualify as “regional skateparks” purely on size alone, though the largest ones are around 40,000 square feet.

Most regional skateparks have qualities that allow them to draw from a wide area. They provide services beyond simply a place to skate. Regional skateparks will almost always have spectator seating, (or ample space for temporary seating), concessions, parking, and lights for evening use. Some regional skateparks are the “classroom” for skateboarding and BMX classes and workshops hosted by the Parks Department. They’ll often be the venue for pro team tours, and show up in video parts.

Regional skateparks are often the goal of communities looking to create an ambitious, impressive facility. The strength of this solution is that it can spur economic development by attracting visitors from a wider area. (Essentially, the further one travels from home, the more money one is likely to spend on necessities.) The regional skaetpark often becomes a premier feature in a Parks Department’s inventory of properties.